Sitting with the big kids!

I think I truly understand what parents mean when they say that your kids grow up too fast.

Can you spot Mia? She is sitting with the big kids, disguised as a Giraffe (albeit a short-necked giraffe).

I was proud to see Mia calmly sitting with the older (and bigger, louder, more rambunctious) kids but also somewhat terrified of how quickly she is already gaining her independence.  Note to self: Our goal is to help her become her own independent person!

All the kids were dressed up for Halloween Preschool Story Time.  Miss K started with pictures of each individual child then we attempted a group photo of all the kids with Miss K.  After much coaxing from the parents, we were able to get a few shots although we never caught the entire group on camera. 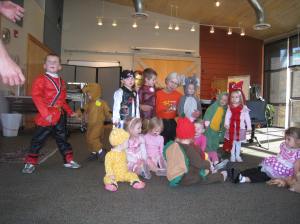 Usually, some of the kids sit right up front by Miss K while several of the younger and/or more timid children hang back with their parents, who sit in a semicircle around the room.  Some kids go back and forth between the group and their parents’ laps.  We’ve been going to Story Time since March; Mia used to sit in my lap and, more recently, on the floor in front of me.  She’ll move around a little bit but had always stayed close, with a hand on me or at least within grabbing distance.

This week, once we were done with photos, Miss K began to lead the group in the normal routine: Several sing-along songs (complete with hand motions), then 2-3 books on the theme of the day (of course, Halloween for this week), then an activity/craft.  I sat on the floor next to Mia, who was in the same place she had been sitting for the picture, while all the kids rearranged from photo-position to sing-song/story time position.  I was about to pick her up and return to our usual spot (in the parent semi-circle) but then — trying to practice the “observe first” guidance — I saw that Mia was enthralled watching the older kids move around her, and she was excitedly observing as Miss K opened up the first of the Song Books.  She was perfectly comfortable and content right where she was!  (Go Mia! What a big girl!) She didn’t need me (sigh…already?) to move her back, away from the group.

So…I backed away slowly and let her sit with the big kids.  I sat there stunned for a moment, thinking ‘Holy crap! She is going to be in High School before I know it!‘ and then, ‘Ah-ha! I should take pictures of this moment!‘.  So here you have it.

All the while, I kept a close eye on Mia, so she could make eye contact with me whenever she wanted to.  And I made sure none of the bigger kids came close to (accidentally) knocking her over or stepping on her or petting her head…that wasn’t really a problem because they are all so excited and attentive during the singing and story-telling.  So there she sat and observed for two whole songs! 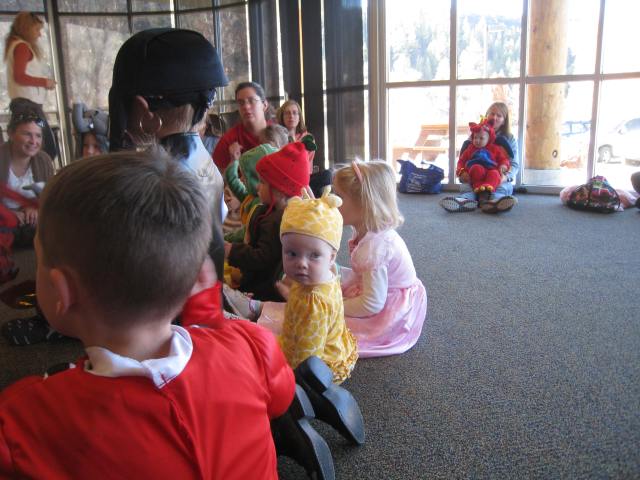 Making sure I am close by and taking another look at that little person, who was sitting in her Mama’s lap right next to me.

After a bit, she started reaching out for me and eventually crawled over to me, and she sat with me for the rest of the songs and the stories.  She is already trying to make the hand gestures to the songs (think Itsy-Bitsy Spider, Wheels on the Bus, Twinkle Twinkle Little Star, Down by the Station), which is adorable.

Geez, they grow up so fast!

I am a mother and a wife, lady scientist, gardener, fabulous cook, foodie, world traveler, and aspiring polymath. I like to ignore stereotypes, challenge the status quo and encourage independent thought.
View all posts by Stephanie →
This entry was posted in Family, Mia. Bookmark the permalink.