I can now see both of her top teeth, though the top right is farther along and the top left is just coming into view through her pink gums.  We can see them, and Mia can certainly feel them.  I can tell they bother her because her hands are often in her mouth, she is drooling a fair amount, she uses her tongue and lips to feel the teeth, she is a bit fussier than normal, and she makes this adorable scrunched up face while rubbing her mouth.  We have not used any over-the-counter medications, but have been using Hyland’s teething tablets, which are a homeopathic remedy.  Those seem to help.

Another thing that I think helped with teething in the past is her amber teething necklace.  You can see that in the first and last photo of this post (https://onemooreintheoven.wordpress.com/2012/09/07/carnivorous/).  The amber comes from the Baltic Sea region and, when worn on the skin, your body temperature allows for release of succinic acid, which allegedly has pain killing properties.  The catch is that you don’t want them to chew on the necklace and, just recently, Mia has discovered it and is determined to pull it off.  So we’re taking a break from the necklace for now.

And now for photos you’ve all been waiting for…She is using her tongue quite a bit lately: for vocalization and to feel those teeth.  Here is a short series of photos that give you an idea of what I mean.  She is talking in a sing-song voice the whole time these photos were taken. 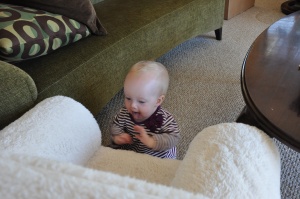 She still loves her chair though she can almost climb out of it (climbing out is no problem, it is the uncontrolled descent following the up-and-over part that has me concerned), thus we often sit on the floor now.

I’ve got your lens cap!

I am a mother and a wife, lady scientist, gardener, fabulous cook, foodie, world traveler, and aspiring polymath. I like to ignore stereotypes, challenge the status quo and encourage independent thought.
View all posts by Stephanie →
This entry was posted in Mia. Bookmark the permalink.