New Mexico, along with much of the Southwest, had a pretty bad fire season this year, thanks to severe drought, high winds and low humidity.  Thankfully, the monsoon season started up in July and put a damper on several of the fires that were burning at that time.

Aaron and I drove through the Jemez last weekend (August 7th) on our way back from Santa Fe.  We wanted to see the damage from the Las Conchas fire and go for a hike in the unburned areas. Here are some photos we took along the way… 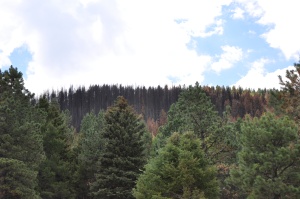 Here is what happens to the streams when a watershed is burned…Soils become hydrophobic, so they cannot perform their normal function of acting as a sponge and filter for rainfall and runoff.  Hydrophobic soils plus lack of vegetation means major soil erosion and increased runoff for a given amount of rainfall. Its ugly and, as you can guess, not exactly good for aquatic species.  But it is part of the recovery process. 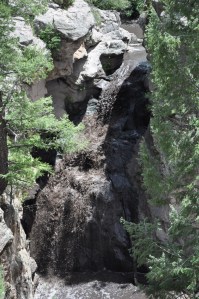 Fires, of course, are a natural phenomena and play an important role in a healthy ecosystem.  Decades of over-zealous fire control resulted in many overgrown areas that may experience severe fires.  Drought and high winds also lead to increased frequency and severity of fires.  For those of us living in the Southwest, fires may become more and more common over the coming years.  We’ll hope for the best.

Not all was burned, as you can see from the photo below: that is me at the road-side stop next to the Valles Caldera…the northern and north-eastern sides (on the right in the photo) was burned, but not completely; the western portion (left in photo) was spared.

The burned land has already started to rejuvenate and will eventually heal itself.  Now if we can just keep all the fire-starting idiots out of the forest…

I am a mother and a wife, lady scientist, gardener, fabulous cook, foodie, world traveler, and aspiring polymath. I like to ignore stereotypes, challenge the status quo and encourage independent thought.
View all posts by Stephanie →
This entry was posted in Other. Bookmark the permalink.